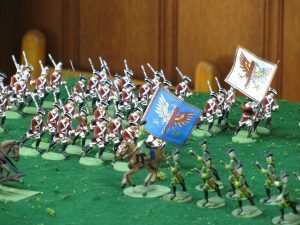 Rules: I can not remember the name of the rules, but they are the same ones that we used in his last RJW game.

Rules: Memoir 44 rules from the Board game of the same name.

Title:  Cavalry Action on the Way to Leipzig

Rules: To the Sound of the Guns

Setting:    A meeting engagement somewhere south of ParisAs the allied Armies of the North and of Silesia advance south towards Leipzig, part of the cavalry of the Grande Armee attempts to halt their advance cavalry force.

Notes:Specific cavalry oriented play sheets will be available.A light lunch will be provided

Location:Strawberry Patch Park in Madison (smaller yellow house behind larger one at 7574 Old Canton Rd. across from MRA athletic field)

Title: The battle of Eutaw Springs

Rules: Whites of Their Eyes

Notes:  This was the last large battle in the Carolinas during the American Revolution.  There will be  250 BritishLoyalist figures facing an attack by 300 Americans from Steve’s 25mm collection.

Title: The battle of Perryville 1962

Rules:For this battle in the American Civil War we will use Larry Brom's"ACW rules"

A light lunch will be provided so that we will lose less time.[[/emphasis]]

Notes:  This will be quite a large game.   The tank battle of Prokhorovka was a clash between two immense armored forces. As the SS Panzer Corps started its advance, the Soviet artillery erupted and soon after the 5th Guards Tank Army under Gen. Pavel Rotmistrov accelerated toward the German advance. Rotmistrov's plan was to close quickly to negate the advantage held by the longer range German tanks.The fighting became a swirling melee and soon the battlefield was littered with the shattered remains of smoking armor. Losses on both sides were enormous. Combined, over 700 tanks were lost and because the battlefield remained in Soviet control the Germans could not recover and repair their losses.

Notes on the Location:We are finally getting to return to my church for a club game.But there are a couple of considerations for attending—If you are fully vaccinated, you are encouraged to wear a mask; if you are not fully vaccinated, you must wear a mask.These are not my directions, but those of the Session of the church.As an officer of the church, I must insist that these considerations be followed, especially the latter one.Right now with the proliferation of the Delta variant among the unvaccinated, we must all be especially careful.

There will also be some members of the church there preparing the Meals on Wheels in the Fellowship Hall.If the front door is locked, please call my cell phone (769-226-5754) and someone will come let you in.If the door is unlocked, please walk all the way down the hall, take a quick right then left, and continue down to the library at the end of that hall.

Title: The battle of Quinby Bridge and Plantation.

Rules:We will use Larry Brom's The Sword and the Flame rules.

A light lunch will be provided so that we will lose less time.

Title: Rage among the mercenaries

Scenario: various bands of mercenary Condottiere soldiers fight in Italy to advance the cause of France or Spain.  Set in the 1500s, this is the period of the most colorful armies of all time.

A light lunch will be provided so that we will lose less time.