Jackson metro attendees normally rendezvous at Jay's house by 9:30 to carpool/convoy to Alex's.  Contact Jay if you plan on doing that.

Notes:  Alex will provide sandwiches and light snacks to refuel the combatants. This information provided by Jim Pitts. Gaming schedule maintained by Jim Pitts and Jay Stribling. If you are interested in running and/or hosting a game contact one of them.

Rules:  "For King and Parliament"

Notes:  This is a fictitious scenario developed by the creators of the rule set.  The players generalship will be tested by the relative scarcity of general officers, divided commands, and close terrain.  We'll see several different types of foot and horse as well as some artillery for this second game using FKaP.

This is our current list of scheduled games and open game days for April, May and June.

April 30 -- nothing scheduled yet

May 21 -- nothing scheduled yet

June 4 -- nothing scheduled yet

Jun 18 -- nothing scheduled yet

If you want to run a game on any of the open dates, please contact Jay Stribling or Jim Pitts so we can get you on the schedule.

See you at a game soon!

Just a quick recap of games played during the 1st Quarter of this year and to get used to posting in the new website format. Stay tuned for the 2nd quarter.

Setting: Ironclad actions along the Mississippi River in 1862

Setting: Russians versus Germans in the ruins of Stalingrad, featuring NKVD armored train #73.

Setting: Following the defeat of Prince Rupert at Marston Moor (2 July 1644), the Parliamentarians spent much of the summer clearing the Royalists out of mid-Wales.  In early September, they captured a Royalist ammunition convoy and placed it for safety in Montgomery Castle.  Royalists gathered forces from Cheshire, Lancashire, and Shrewsbury as well as regiments returning from Ireland and laid siege to the castle.  The Parliamentary forces were gathered from Cheshire, Derbyshire, Lancashire, and Yorkshire to raise the siege.

Rules: "For King and Parliament" -- a square-gridded, card driven rule set.  Instruction and play sheets will be provided.

Setting: This battle was fought on January 17 & 18, 1746, between the Jacobite army under Lord George Murray, and the Government army under General Henry Hawley.  A two day affair, the Highlanders did very well on the first day.  But the second day's battle saw both sides worn out; they both claimed victory and "went home".

Jan 17 - In years past a Jackson Gamer who now lives in North Carolina would visit and gamemaster a game on the MLK holiday using the Carnage and Glory game system. This year, due to the uncertainties brought on by the OMICRON variant of COVID, we had to cancel that game. 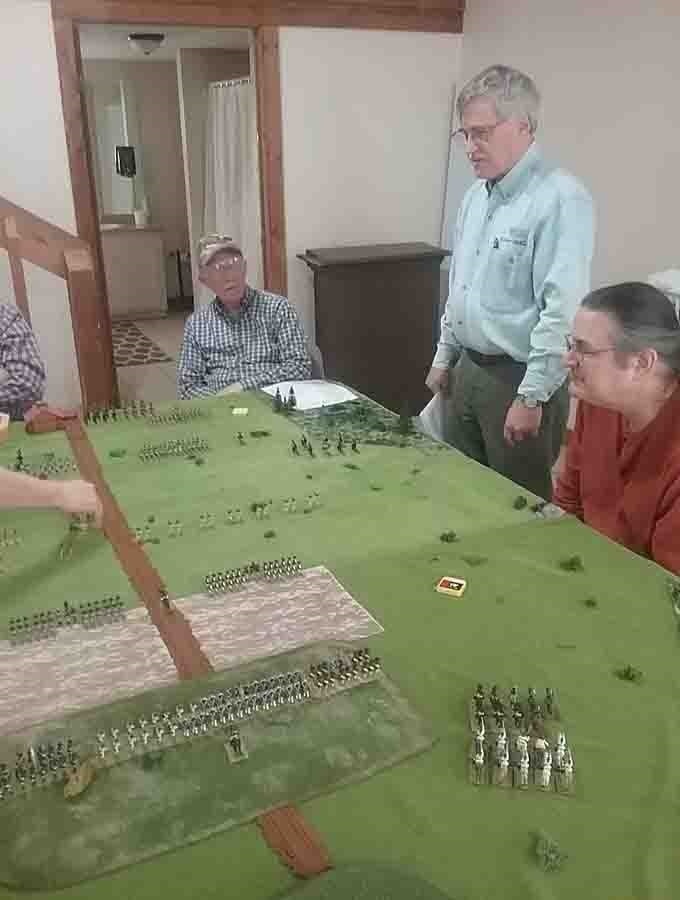 Setting: Dan Morgan and his 1,400+ Continentals and militia against “Bloody Ban” Tarleton and his 1,000 British regulars and Tories on the almost 241st anniversary of the battle.

Rules: “Whites of Their Eyes” by Steve Haller